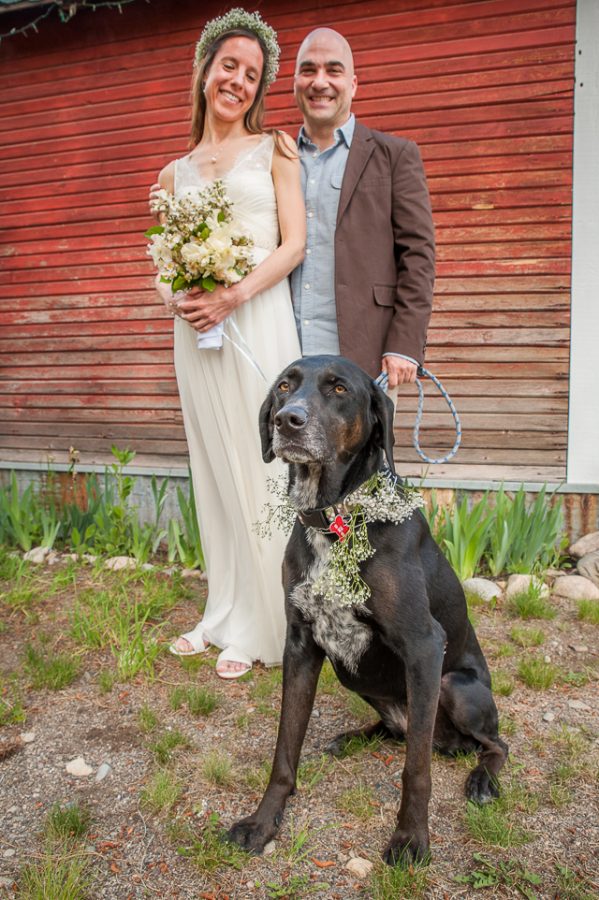 It was a chilly day in Mazama for June but lately long-time locals have been referring to this month as Juneuary so it could have been worse. It did not rain! And the weather did not stop anyone from having fun. Lots of kids kept warm with constant play; adults put on extra jackets. As it grew later, the bride found some wool socks and a fleece that nicely matched her wedding dress! And the music kept everyone moving.  There was local bluegrass for the first half of the day and later a band named Moon Doggies played for the dancers. The barn at the Mazama Ranch House was stunning with lights and flowers and the food from Sunflower Catering was wonderful. Later, a campfire was a welcome gathering spot.

Jenn and Mark’s love for each other was completely evident every time they looked at each other. They were both absolutely radiant with happiness to be joining their lives together and making plans for the future! They had a small wedding party – just the two of them along with their dog, Zoe, who served as the flower girl. Zoe took her job very seriously. Everyone strolled to the ceremony in a pine grove where straw bales were provided for seating. A spreading ponderosa pine was the chuppah. There was no shortage of hugs and affection throughout the day.

What a beautiful day. Many thanks to Jenn and Mark for including us in their celebration. We were honored.